This year's Codemash didn't disappoint with their sessions. In this post, I cover the sessions I attended and the general feeling of the conference. 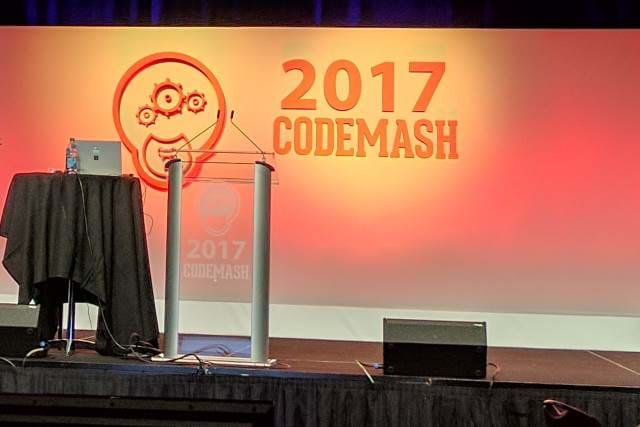 As I sit here writing this post, it's Friday night at the Kalahari Resort in Sandusky, OH and Codemash is over.

I'm exhausted from the sessions and the amount of electricity firing in my brain over the past week while trying to comprehend the new technologies and new perspectives to implement old technologies.

My brain is officially full!

Tomorrow, I'll grab my ritual coffee and pastry from the Kalahari before I leave and sit down to decompress before the trip home. 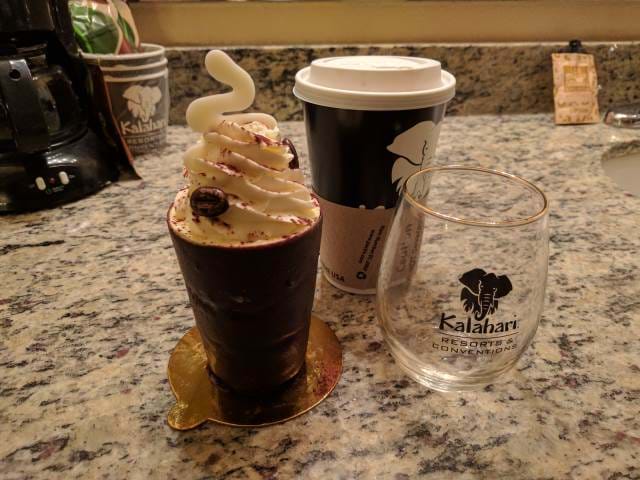 This year was no different. ;-)

As mentioned in previous posts (2016, 2015), I wanted to provide a summary of the sessions I attended over the week, not just for my readers, but for me to remember what I did over the week.

So as I mentioned in my tweet, "Let's do this!"

The first two days are always the "Pre-Compiler" days where you participate in either a 4 or 8-hour workshop with a laptop trying new techniques or technologies.

Jason gave a great session on how to use Xamarin by building a very simple weather app.

First, he provided a little bit of Xamarin history, how to structure your Xamarin App with different UIs and platforms, and finally, dove into building a simple mobile weather app with step-by-step instructions.

VERY helpful and thorough. One of the misconceptions of a Xamarin project was using a portable library that contained all of the code for each platform.

I thought all of the code we wrote was the "host" project.

It was the portable library we were maintaining while we didn't even touch each UI (Android, iOS, Windows Phone, etc).

Overall, I learned a lot about how to build a Xamarin app, but my XAML is a bit rusty.

He was definitely a great presenter at Codemash. His perspective on UI was definitely enlightening and provided an even edgier look into the psychology of how people perceive UI...

His 13 years of UI experience gave the audience a look into how UI SHOULD be done and gave pros and cons of light and dark displays.

There were a couple of programmers trying to justify it.

We waste the world's time by not providing shadows. Can't do so effectively on dark BGs. @MillerMark #codemash #UX pic.twitter.com/5lYQjh2Y0c

This session provided a great introduction to building an ASP.NET Core application complete with unit and integration testing along with SOLID principles.

First, Steve gave everyone an architectural overview of what a Domain-Driven application looks like.

Next, he mentioned we were going to build a completed application by the end of the session which was a guestbook.

Personally, I think Steve has a great approach to presenting in his sessions.

He presents in a way where he discusses the approach then explains why we'd move in that direction. From there, he gives the audience enough time to write code related to said approach while walking around answering questions. Then he moves on to the next topic and repeats the process.

Overall, this was a great introduction to ASP.NET Core and after the workshop was over, it gave the audience a "souvenir" (REAL code) to take with them to understand how to build an ASP.NET Core web application.

I didn't realize how much there was to Git. This source control tool provides way too much to comprehend in 4 hours.

At the very beginning, we learned how to work with Git at a command-line, get the status, work locally and remotely with branches, merging, and learning katas.

Cori and Keith gave a great presentation and provided Git Cheat Sheets for everyone as well.

I did find out that they wanted to do an 8-hour workshop on Git since there was so much to Git, but they were given a 4-hour window instead.

I can just imagine how much information-overflow would come out of the 8-hour workshop. ;-)

Derek presented his experience with using ASP.NET MVC with CQRS. The code he presented gave the audience a look into how to segment web apps into read (the Q in CQRS) and write (the C in CQRS)

He explained why using MediatR was a great tool for a CQRS app. The command/query would come in, it would be sent to MediatR, and MediatR would direct the message and execute the explicit code.

Overall, a great session on introducing a specific CQRS technique into an ASP.NET MVC web application.

He seemed a little nervous based on his post. ;-)

9:15a - Hypermedia APIs: The rest of REST / Chris Marinos (@chrismarinos)

Chris gave an interesting presentation about an unknown part of REST.

He mentioned the 4 levels of the Richardson Maturity Model:

For now, we are currently at Level 2. He explains we are in the infant stages of moving to level 3 and how he's been using level 3 for a while.

His examples used Postman and Siren to send and receive data.

For a more detailed description, I found a similar video of him explaining the same thing from Codemash: Hypermedia APIs: The rest of REST.

Justin gave us a whirlwind technical tour of what "researchers" are doing to test real-world web applications along with communications.

The companies mentioned in the talk were:

He definitely had a humorous approach to explaining each hack. Once a vulnerability was found by a researcher, he jokingly would say, "what would happen if I changed this value?"

Once the value was applied, he explained the thought-process of the individual, how they exposed the vulnerability, and mentioned the bounty paid to the researcher.

To summarize his session:

A great session with real-world examples to teach developers not to become lazy in their efforts when it comes to the web.

Of course, I had to go to this session.

Since I've mentioned Aurelia a couple times, I wanted to see if I was missing any tips or tricks with Aurelia.

Mark described three bot architectures throughout his talk. He also mentioned what each bot's architecture was comprised of.

For bot technology, JavaScript, WebHooks, and cloud hosting were factors in learning how to build your own bots.

His presentation is located on GitHub (Building and Designing Bots and Bot Architecture).

3:30p - Are you Ready For Chaos? Horizontal Scaling in a Briefcase / Matt Groves (@mgroves)

Matt always gives a unique and interesting presentations every year.

This year, he created a "cluster-in-a-box" with a couchbase database and explained the CAP theory behind clustering.

The theorem explains that you can have only two out of the three guarantees.

He visually proves this with his "cluster-in-a-briefcase" and would take down one node and watch the others pick up the slack. 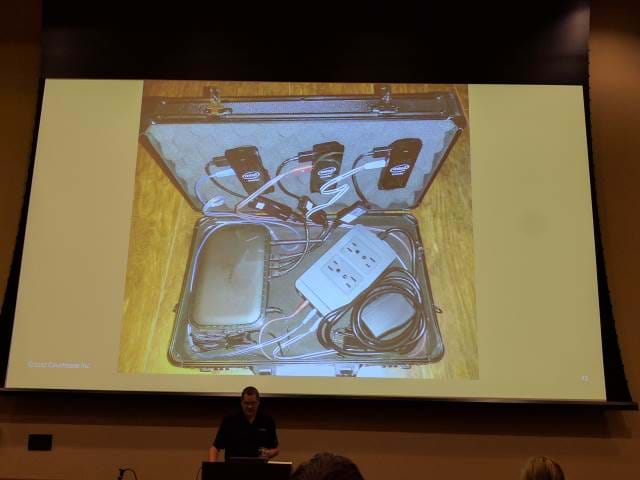 I thought this was a great session that mixed hardware and software to prove multiple points why you can't have all three guarantees and demonstrated the clustering ability of Couchbase.

For those who haven't heard of the 12 Factor App, it's a step-by-step checklist for Heroku developers. Eric wanted to apply it more to a .NET application.

While I won't go into the presentation, his session was spot-on with a .NET translation from Heroku.

It may have been too early in the morning, but it didn't seem like the audience was awake yet.

However, Warner pushed forward with his talk on how to automate security into building software.

His presentation provided a solid number of items to include in your software when developing for the real-world.

His session was in the main hall and, of course, easily packed the crowd in to see his code antics and how far we can push C#.

He touched on a number of techniques and loaded some projects he worked on to convey his message with each topic.

While I could go on, I think his code on GitHub would explain more of what he was trying to achieve and how far C# can go.

Jon, you are definitely a great presenter.

11:00a - Microservices: Lessons Learned From The Trenches / Gregory Beamer (@gbworld)

In my opinion, one of the best presenters at Codemash was Mr. Beamer. His lessons from the trenches were excellent.

I looked into my notes on his session.

I only had a couple lines. I remember him saying he would upload his deck and make everyone aware when it was out there.

Overall, a very entertaining gentleman who was very informative.

UPDATE: His slide deck is located on GitHub (https://github.com/gbworld/Microservices-Lessons-from-the-Trenches)

Since I was integrating Identity into my ASP.NET Core application, I thought this would be a great session to attend.

After listening to Ondrej talk about the history and the updated Identity structure, I'm glad I attended.

Thanks, Ondrej, for a great session.

One of the technologies I wanted to learn more about was Bot frameworks. No, not like hardware bots, but chat bots.

After Sarah went into the introduction, she mentioned that if she went too fast, the documentation was located at docs.botframework.com. She was going off of a Quick Start on the site.

So within 30 minutes, she had a simple build and deploy of a chat bot.

She also mentioned that a good starting point for developers was the dev.botframework.com.

She cut it pretty close to deploy the bot out to Azure...right down to the wire, but she did it.

One of my favorite speakers, Mr. Fritz, presented on .NET Standard Demystified while giving developers a glimpse into the next version called 1.2 2.0.

There wasn't much to take away from the presentation except the following:

I found Jeff very entertaining throughout his talk and very informative (and he grew up on Commodore just like me) :-D.

The .NET Standard code is located on GitHub.

With newer browsers, we can expect to see a more robust JavaScript arrive with the new ES6 specification.

Jeffrey Strauss went into all of the features in ES6 with examples.

The topics he touched on included:

In my opinion, these are all welcome features in JavaScript.

His deck is located on speakerdeck.com.

As always, this Codemash was a blowout.

I met some old friends and new friends while having a great time this week.

They even brought back the dessert table. 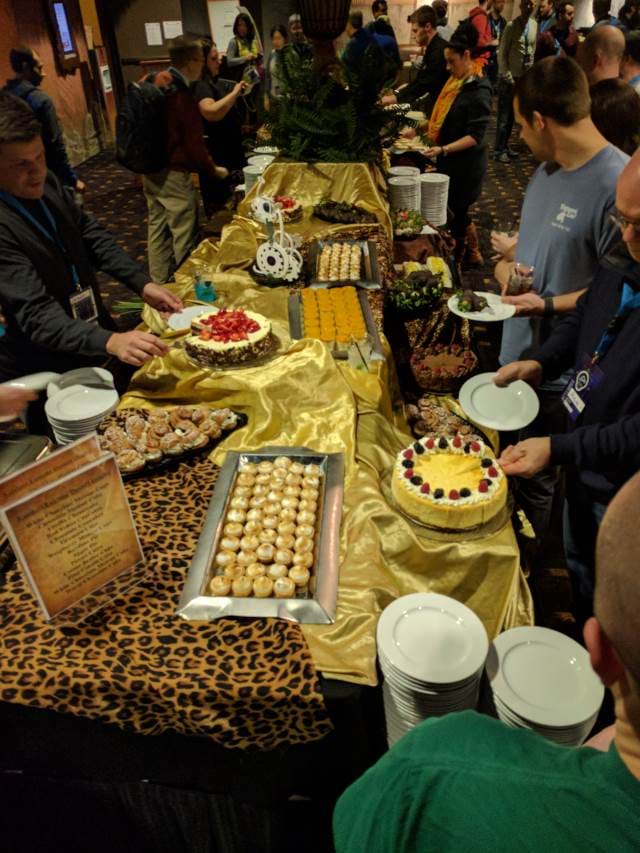 If you ever get the chance, by all means, make sure you head to the Kalahari next year for Codemash 2018.

Did I miss you at Codemash? Were you looking for the shoes? Post your comments below.