5 life lessons I learned from a programming competition in 1995

Early in my career, I decided to enter a programming competition. Nothing like being humbled. Here's what I learned from that experience. 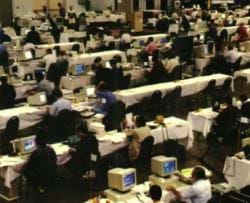 One of my favorite times in my career was a road trip down to Durham, North Carolina for a programming competition in 1995. The competition was meant for anyone who thinks they had the best RAD tool on the market.

I was working in Erie, PA at the time and took time off to compete. My co-workers thought I was nuts.

At the time, my language of choice was Clipper (the company was Nantucket at the time). For those who have no idea what I'm talking about, Clipper was a dBase III+ compiler that would build and link (anyone remember Blinker?) the dBase III+ code to create a DOS executable and used the DBF file format for storage, but Clipper could also be extended through C++.

I used C++ in Clipper in a similar fashion as to how I use JavaScript in websites today. I only sprinkled in enough to make it functional and then stop.

During my off-work hours, I built a screen generator, menu generator, report builder, and business logic manager...totally in Clipper.

After I finished the work, I tested it and then decided to show my co-workers. They couldn't believe that I built a click-and-drag system...

I was ready for the competition. It was just me competing. 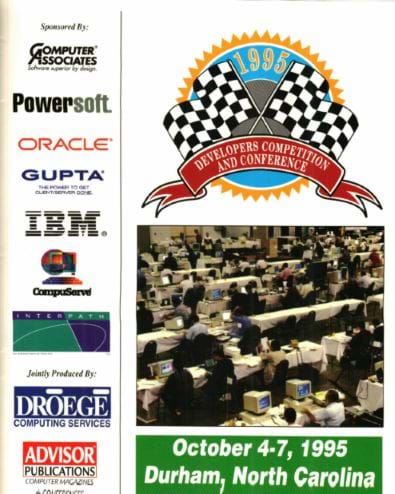 When I got down there, I had never seen so many coders. Hey, I was a small-time coder who had extreme dreams. :-)

There were people from all over the United States who came to North Carolina to compete and learn from their lessons using their software development tools in a real-world scenario.

The rules for the competition were simple.

Yes, a 14-hour day coding, then sleep, then code for another 4 to finish it off...and yes, there were people setting up Mountain Dew IVs (kidding!).

When the competition started, I was given the specification and read it thoroughly. Some coders were already creating their templates for the application while the others were busy reading the specification and highlighting key points. All I could think of was the old coder saying, "You go find out what the user needs, I'll start coding."

That couldn't be more true. I was at a disadvantage. It was just me.

I won't bore you with the details, but on that night around 9:00p, I looked around the room and people were scurrying around, clicking keys, moving papers, printing reports, and trying to get the majority of their code put together...through the slits of their eyes.

The majority of coders were exhausted, but there were others who felt the "rush of the code" who were fueled by adrenaline and Mountain Dew who continued to attack the keyboard like they were a machine.

At the end of the competition, everyone presented their applications to the judges. The judges would walk around each programmer station to see the walkthrough of the competitors' finished app.

A majority of the coders never finished the entire application according to the specification, including me, but I would guess that close to 10% finished it.

I didn't win, but it was an awesome experience that I enjoyed a lot. I didn't win 1st or 2nd, or even 15th place. Granted, it would've been nice to have bragging rights, but I'll get to that later (Lesson #2 below)

So what did you learn?

Glad you asked. I was getting to that.

I was definitely humbled while at the competition and I met a lot of people. It was a great experience for a small-town developer.

Some of my takeaways from this competition still follow me to this day. Here is what I learned:

Looking back, there were so many benefits to entering this competition. It was also a great getaway for a young kid to experience.

And all because I went to a programming competition to see if I "good enough." ;-)